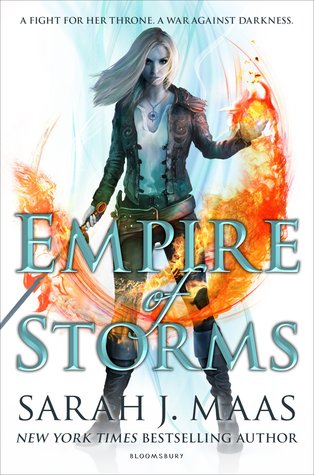 The long path to the throne has only just begun for Aelin Galathynius as war looms on the horizon. Loyalties have been broken and bought, friends have been lost and gained, and those who possess magic find themselves at odds with those who don’t.

With her heart sworn to the warrior-prince by her side, and her fealty pledged to the people she is determined to save, Aelin will delve into the depths of her power to protect those she loves. But as monsters emerge from the horrors of the past, and dark forces become poised to claim her world, the only chance for salvation will lie in a desperate quest that may mark the end of everything Aelin holds dear.

In this breathtaking fifth installment of the New York Timesbestselling Throne of Glass series, Aelin will have to choose what—and who—to sacrifice if she’s to keep the world of Erilea from breaking apart. (Goodreads 2018)

I have been reading this series since Throne of Glass first came out and it was originally pitched as “the next hunger games”…remember when it was that simple? Haha, me too. I have really enjoyed this series, however I have not always been punctual in reading. This book, number 5, actually came out 2 years ago. I fell behind due to work and I only read Queen of Shadows last January. I have reviewed previous books in the series which can all be found under the author’s tag : here  (I have reviewed Heir of Fire #3 and The Assassin’s Blade. I plan to do a re-read at the end of the series and fill in the gaps!). I had struggled a bit with Queen of Shadows, giving it only 3 stars, but this installment brought it all back for me.

Anyway…because of this, every time I go to pick up the latest book in the series, I worry. I worry I won’t remember half of what has happened, that I will have forgotten most of the plot, that I won’t feel any connection with the characters or the world anymore, that I won’t be interested anymore. Every time, Maas proves me wrong. and manages to pull me back into the story to the point where I simply cannot put the book down until I finish it. This is the second to last book in the series (unless you count Tower of Dawn, which is a side-spin off story)…and oh my god, what an adrenaline rush. I am absolutely dreading the end of the series and this world because I will need something to fill the void. Aelin is constantly the sarcastic badass she has always been, and who we have grown to love, flaws and all. I especially loved the character development of Elide and Manon in this story.

I love that Maas takes the whole “strong female characters” to a new level and freely gives them flaws and weaknesses and attitude, which could easily make a reader dislike them, and she does it unapologetically, just like most authors write male characters, but also the fact that while she writes them as badasses, but also keeps them very emotive. This installment contained so many lineage secrets for so many of the characters it was like there was constant plot twists based from that alone. There is so much going on with so many characters I simply can’t talk about it without risking spoilers, but yes, this is a solid installment of an epic fantasy series and if you haven’t already picked this up, I highly recommend it.

As usual for Maas, five stars and all of the feels. If you haven’t already given this series a try, do it.